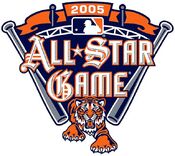 The 2005 Major League Baseball All-Star Game was the 76th playing of the midseason exhibition baseball game between the all-stars of the American League (AL) and National League (NL), the two leagues comprising Major League Baseball. The game was held on July 12, 2005 at Comerica Park in Detroit, Michigan, the home of the Detroit Tigers of the American League. The game resulted in the American League defeating the National League 7-5, thus awarding an AL team (which eventually came to be the Chicago White Sox) home-field advantage in the 2005 World Series.