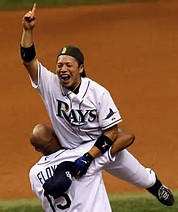 Akinori Iwamura (岩村 明憲, born February 9 1979 in Uwajima, Ehime, Japan) is a Major League Baseball infielder for the Tampa Bay Rays. Throughout the Rays organization, he is commonly referred to "Aki" while in Japan, his nickname was "Gan-chan".

His brother, Takashi Iwamura, is also a professional baseball player who, like Aki, spent two seasons with the Kintetsu Buffaloes. The two were drafted in the same year (1997).

He was a former third baseman for the Tokyo Yakult Swallows in the Japanese Central League. He represented Japan in the 2006 World Baseball Classic, and is nicknamed "Japanese Lightning".

During the 2006 offseason, Iwamura opted to be posted for Major League Baseball. The posts were due to the Major League Baseball Commissioner on November 10, 2006; the highest bidder would be rewarded with negotiations with Iwamura to sign a contract. He is close friends with another Japanese All-Star player, Daisuke Matsuzaka who signed a 6 year-$52 million contract with the Boston Red Sox.

On November 14, information leaked that the highest bidder that won the right to negotiate with Iwamura was the Tampa Bay Devil Rays. Major League Baseball announced the next day that the Rays had made the winning bid; Newsday reported that the Rays had bid $4.5 million. Iwamura was the second player that the Rays had been able to obtain through the posting system; in 2005, they won the rights to negotiate with pitcher Shinji Mori. MLB.com reported that Iwamura's future role with the Rays is currently unclear, since the Rays already have third base prospects B. J. Upton and Evan Longoria in their organization, as well as shortstop Ben Zobrist. By the end of the 2006 season, Zobrist and Upton were the team's regular starters at shortstop and third base, respectively and Longoria hadn't yet reached the majors. In 2007, Iwamura found a home at third base, despite the competition. Upton settled in well in center field and Zobrist did not meet expectations resulting in an unsettled shortstop position. Iwamura will begin to work out at second base in the event that Longoria makes the big league club.

Iwamura began his MLB career as the starting third baseman for the Devil Rays. Iwamura did not hit well in his first spring training but seemed to adjust quickly to MLB pitching once the regular season began, hitting .339 in April. However, he was hit in the eye on a freak play while chasing down a fly ball and was on the disabled list until May 28th.

Also an interesting fact is that Aki's glove is made out of crocodile skin, like some gloves are made out of kangaroo hide.

On September 1, 2007, in a game against the New York Yankees, Akinori Iwamura had his bat confiscated in the second inning. With two outs in the second and Iwamura was at-bat facing a 2-2 count, Yankees manager Joe Torre stepped from the dugout to talk to home-plate umpire Kerwin Danley, who called in the rest of the crew for a conference. Maddon was then summoned from the dugout. When all the talking finished, Iwamura had to hand over his bat to the umpiring crew. He then struck out swinging to end the inning. Although he went 0-for-4 that day in the Rays' 9-6 loss, he hit a home run the next day against the Yankees in an 8-2 Rays win. Iwamura said afterwards "I was very surprised." [2]

According to Rays team spokesman Chris Costello, the Yankees questioned the flatness of the end of Iwamura's bat. The bat was sent to the Commissioner's Office for inspection, where it was found to be acceptable for use. It was later returned to Iwamura with Joe Torre's signature.

With Rays' 3rd base prospect Evan Longoria rising quickly through the team's minor league system, Iwamura moved to 2nd base on the Rays' infield. The transition went extremely well, as Aki and Rays' new shortstop Jason Bartlett quickly became one of the best double play combinations in baseball, helping the Rays to their best start in franchise history.[3]

Again batting leadoff, Aki struggled at the plate in April, hitting just above .200 for much of the month. However, his batting improved significantly in May and June, when he was among the league leaders in hits.

Retrieved from "https://baseball.fandom.com/wiki/Akinori_Iwamura?oldid=48687"
Community content is available under CC-BY-SA unless otherwise noted.