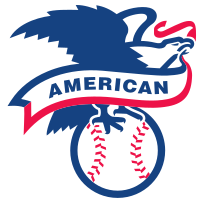 The American League (or formally the American League of Professional Baseball Clubs) is one of two leagues that make up Major League Baseball in the United States of America and Canada. It developed from the Western League, a minor league based in the Great Lakes states, that eventually aspired to major league status. The A.L. is often called the Junior Circuit because it was elevated to Major League status 25 years after the formation of the National League. Beginning with the 1903 season, the regular season champions of the two leagues have met annually in the World Series, with the exception of 1904 and 1994. Through the 2005 season, American League teams have won 60 and lost 41 of the 101 World Series played.

With the demise of the American Association after the 1891 season, the National League expanded to become a 12-team circuit with monopoly status for the rest of the decade. The league became embroiled in internal conflicts, including a plan supported by some owners to form a "trust," wherein there would be one common ownership of all N.L. teams. In 1894, the N.L. established a $2,400 limit on annual player wages. Then, the league contracted to eight teams for the 1900 season, eliminating its teams in Baltimore, Cleveland, Louisville, and Washington. Western League President Bancroft "Ban" Johnson felt the time was right to challenge the N.L. monopoly.

The organization renamed itself the American League on October 11, 1899, and placed teams in the abandoned Cleveland market as well as on the south side of Chicago. This was done with the approval of the National League, which did not immediately recognize the potential threat such a move would pose to its monopoly.

During the 1900 season, the rechristened A.L. was still a minor league circuit subject to the National Agreement. The league declined to renew its National Agreement membership when it expired in October of 1900, and on January 28, 1901, officially declared itself a major league. It placed teams in Baltimore and Washington, both victims of the N.L. contraction, as well as in Boston and Philadelphia where (as in Chicago) it would compete head-to-head with the older league. (Only Detroit and Milwaukee remained of the original Western League franchises.) The new league began to hire disgrunted National League players. A roster war was on.

The older National League at first refused to recognize the new league, but reality set in as talent and money drained away to the new league. After two years of bitter contention a new version of the National Agreement was signed in 1903. This meant formal acceptance of each league by the other as an equal partner in major league baseball. During the baseball "war" however, the American League moved its Milwaukee franchise to St. Louis in 1902 and the Baltimore franchise to New York in 1903, thus competing with the N.L. in those markets as well.

The American League consisted of the same eight teams from 1903 through 1954, when the St. Louis Browns moved to Baltimore and were rechristened the Baltimore Orioles. In 1955, the Philadelphia Athletics moved to Kansas City (the A's would move to Oakland in 1968). In 1961, the Washington Senators moved to Minneapolis-St. Paul and became the Minnesota Twins.

In 1969 the American League expanded to 12 teams when the Kansas City Royals and Seattle Pilots joined the league. (The Pilots stayed just one season in Seattle before moving to Milwaukee and becoming the Milwaukee Brewers). With the addition of these teams, the league reorganized into two divisions of six teams (East and West), with the division champions meeting in the American League Championship Series, an additional round of postseason competition, for the right to advance to the World Series. Beginning with the 1994 season, the league has been divided into three divisions (East, West, and Central), with the addition of a Wild Card team (the team with the best record among teams finishing in second place) to enable four teams to advance to the preliminary American League Division Series.

The league adopted the designated hitter (or "DH") rule in 1973 whereby a team may choose to designate a tenth player (not a position player) to bat in place of the pitcher. Contrary to popular belief, use of the DH is not mandatory. Though maligned by come critics, use of the DH rule has spread to almost every amateur and professional league, the two most notable exceptions being the National League and Japan's Central League.

The third expansion came in 1977, when the Seattle Mariners and Toronto Blue Jays joined the A.L., which thus became a 14-team league. Finally, in 1998 the Tampa Bay Devil Rays became the fifteenth team to join the American League. Concurrently, however, the Milwaukee Brewers withdrew from the league to join the National League. The simultaneous expansion and contraction kept the A.L. a 14-team league, which it remains today.

For the first 96 years of its existence, American League teams faced their National League counterparts only in exhibition games or in the World Series. Beginning in 1997, however, interleague games have been played during the regular season, and count in the standings.

Starting in 1901, the eight charter teams were the following:

(*)See commentary on Western League page. The Buffalo, Indianapolis, Kansas City and Minneapolis teams were replaced by teams in Baltimore, Boston, Philadelphia and Washington in 1901, but it is unclear and disputed as to which team went where.

Office was eliminated in 1999, although Jackie Autry, former owner of the Anaheim Angels, currently holds the title of honorary American League president.

Several other sports have had leagues called "American League", usually with the sport name as a qualifier, such as the "American Football League" (which eventually merged with the National Football League, adopting the latter's name for the combination).

Retrieved from "https://baseball.fandom.com/wiki/American_League?oldid=34550"
Community content is available under CC-BY-SA unless otherwise noted.