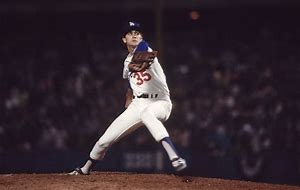 Robert Lynn Welch (November 3, 1956 – June 9, 2014) was an American professional baseball starting pitcher. He played in Major League Baseball for the Los Angeles Dodgers (1978–87) and Oakland Athletics (1988–94). Prior to his professional career, he attended Eastern Michigan University, where he played college baseball for the Eastern Michigan Hurons baseball team. He helped lead the Hurons, coached by Ron Oestrike, to the 1976 College World Series, losing to Arizona in the Championship Game.

Welch was a two-time MLB All-Star, and he won the American League Cy Young Award as the league's best pitcher in 1990. He was a member of three World Series champion teams. He is the last pitcher to win at least 25 games in a single season (27 in 1990).

On June 9, 2014 Welch died of a broken neck, after accidentally falling in his bathroom.

Retrieved from "https://baseball.fandom.com/wiki/Bob_Welch?oldid=50591"
Community content is available under CC-BY-SA unless otherwise noted.