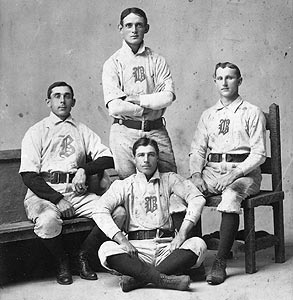 Listed at 5 ft 10 in (1.78 m), 150 pounds (68 kg), Lowe was a right-handed batter leadoff man with fair power and one of the best second baseman of the 19th century. In the field and at the plate, he starred on all five Beaneaters pennant winners of the 1890s and in the 1892 World Series Championship.

Bobby Lowe died in Detroit, Michigan at 86 years of age. He is a member of the Lawrence County (Pennsylvania) Hall of Fame.

Retrieved from "https://baseball.fandom.com/wiki/Bobby_Lowe?oldid=8620"
Community content is available under CC-BY-SA unless otherwise noted.