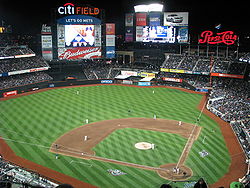 Citi Field is a professional baseball stadium located in Queens, New York. It is the home baseball park for Major League Baseball's New York Mets. Citi Field was built as a replacement for the adjacent Shea Stadium, which was itself constructed in 1964 adjacent to the site of the 1964-1965 World's Fair. Citi Field was designed by HOK Sport, and is currently named after Citigroup, a financial services company based in New York City. The $850 million baseball stadium is being funded by the sale of New York City municipal bonds which are to be repaid by the Mets plus interest. The payments will offset property taxes for the lifetime of the park.

The first game at the stadium took place on March 29, 2009, with a college baseball game between St. John's Red Storm and the Georgetown Hoyas.[1] The Mets played their first game at the stadium on April 3, 2009, in a charity exhibition game against the Boston Red Sox[2][1], and the first regular season home game is scheduled for April 13, 2009, against the San Diego Padres.[3] The Mets are bidding to host the 2013 All-Star Game at Citi Field, which would bring the game to the Mets' home field for only the second time; the first was at Shea in its 1964 inaugural season.[4]

The original plans for what is now Citi Field were created as part of New York City's 2012 Summer Olympic bid. After plans for a West Side Stadium fell through, New York looked for an alternate stadium to host the opening and closing ceremonies. The Olympic stadium project was estimated to cost $2.2 billion with $180 million provided by New York City and New York State. If New York had won the bid, the stadium would have been expanded to host the opening and closing ceremonies, as well as other sporting events.

The projected cost of the new stadium and other infrastructure improvements is $610 million, with the Mets picking up $420 million of that amount. The agreement includes a 40-year lease that will keep the Mets in New York until 2049.

On March 18, 2006, the New York Mets unveiled the official model for the new stadium. By July 2006, initial construction of the new park was underway in the parking lot beyond left-field, with a projected finish ahead of Opening Day 2009 in late March. As of April 13, 2008, all of the structure for the Jackie Robinson Rotunda was in place with the arched windows receiving their paneling and glass. By August 2008, the New York Mets and Daktronics installed 12,000 square feet of integrated scoring and video boards throughout the stadium.[5] By September 2008, most of the Citi Field signage had been installed.[6] By December 1, 2008, all of the seats and the playing field had been installed.[7]

The new stadium has a planned capacity of 45,000 (42,500 seats, ~2,500 standing room), approximately 12,000 fewer seats than Shea Stadium. The exterior facade and entryway rotunda are reminiscent of Ebbets Field (which was long sought by Mets owner Fred Wilpon, a Brooklyn native). Citi Field will join Coors Field and Safeco Field as modern ballparks with approximate replicas of the Ebbets Field rotunda. The formal dedication of the Jackie Robinson Rotunda will be held as part of Major League Baseball's official celebration of Jackie Robinson Day on April 15, 2009.

Citi Field's interior design is primarily influenced by PNC Park, which was the favorite ballpark of Mets COO Jeff Wilpon. Other influences include Tiger Stadium, Great American Ballpark, Coors Field and Citizens Bank Park.[8] Shea Stadium was the only ballpark in the Major Leagues to feature orange foul poles instead of the standard yellow, a unique characteristic that will make its way into Citi Field, along with the Mets' own Home Run Apple (a new apple has been constructed for Citi Field that is more than four times the size of the previous one and was designed by Minneapolis-based engineering firm Uni-Systems[9]).

Delta Air Lines signed a multiyear deal on September 15, 2008, to sponsor an exclusive section in Citi Field. The Delta Sky360 Club is a 22,500 square foot restaurant-cafe-bar-lounge complex that also houses 1,600 premium seats behind home plate stretching from dugout to dugout.[10]

The Pepsi Porch is a 1,284 seat area located in right field and extends over the playing field. A 37 foot by 89 foot Pepsi Cola sign, reminiscent of the one located in Long Island City, sits atop the Pepsi Porch.[11]

Taste of the City is a food court located in the left center field section of the ballpark. It is run by restaurateur Danny Meyer and includes several of his franchises such as Shake Shack and Blue Smoke.[12]

Citi Field is located in the borough of Queens, adjacent to the neighborhoods of Corona, which lies to its west, and Willets Point and Flushing to the east. Flushing Bay is to the north, and the rest of Flushing Meadows–Corona Park is to the south. Because it lies within the Flushing postal zone, and because of its location in Flushing Meadows-Corona Park, its location is frequently referred to as Flushing.

Citi Field is adjacent to the USTA Billie Jean King National Tennis Center, where the annual US Open grand-slam tennis tournament is held.

Since the construction of Citi Field began, satellite parking lots in Flushing Meadow Park (access from College Point Blvd) have been opened.

On November 13, 2006, it was officially announced that the stadium would be called Citi Field, named for Citigroup Inc. Citigroup will be paying $20 million a year for the naming rights to the park over the next 20 years. This made Citi Field the second major league sports venue in the area named for a corporate sponsor, (after Continental Airlines Arena (now Izod Center) in the Meadowlands, but preceding Prudential Center in Newark and Barclays Center in Brooklyn), officially becoming the first in New York City itself, aside from two minor league ballparks (KeySpan Park in Brooklyn, and Richmond County Bank Ballpark in Staten Island). The deal includes an option on both sides to extend the contract to 40 years, and is the most expensive sports-stadium naming rights agreement ever, subsequently equaled by Barclays' $400 million deal with the New Jersey Nets for their planned arena in Brooklyn.[13]

At the groundbreaking for Citi Field, it was announced that the main entrance, modeled on the one in Brooklyn's old Ebbets Field, will be called the Jackie Robinson Rotunda, possibly due to campaigns to forego naming rights and name the ballpark after Robinson. The Mets are spending more than $600 million for the new stadium, which New York City and New York state are also supporting with a total of $165 million for such costs as infrastructure and site preparation. On February 24, 2008, the Mets and Citigroup unveiled the new Citi Field logo.[14]

Both Citigroup[15] and the Mets[16] maintain that the naming rights deal is secure, despite Citigroup's economic troubles. This deal has been criticized in light of the economic crisis of 2008-2009 and the $45 billion of taxpayer funds allocated to Citigroup by the US Government in two separate rescue packages, prompting New York City Council members Vincent Ignizio and James Oddo to suggest that the new ballpark be called "Citi/Taxpayer Field."[17] Congressman Elijah Cummings of Maryland, who serves on the United States House Committee on Oversight and Government Reform, stated in regards to the Citi Field naming rights deal, "This type of spending is indefensible and unacceptable to Citigroup's new partner and largest investor: the American taxpayer.... I strongly urge Citigroup to find a way out of this contract and instead spend that $400 million on retaining its employees and restoring confidence in its operations."[18][19][20] On January 29, 2009, congressmen Dennis Kucinich of Ohio and Ted Poe of Texas sent a letter to Treasury Secretary Timothy F. Geithner urging him to scrap Citigroup's $400 million naming rights deal. "We request that you intervene and demand that Citigroup dissolve the agreement they have with the New York Mets," reads the letter. "Absent this outcome, we feel strongly that you should compel Citigroup to return immediately all federal monies received to date, as well as cancel all loan guarantees."[21][22] However, Geithner rejected congressional demands to cancel the naming rights deal.[23]

The Wall Street Journal reported on February 3, 2009 that Citigroup considered breaking the naming rights deal. Citi has stated that no government TARP funds would be used in the sponsorship deal.[24]

On January 14, 2009, the Mets unveiled the Citi Field Inaugural Season sleeve patch, to be worn on the players' right sleeves for the 2009 season. As Major League Baseball rules prohibit corporate names on uniforms, the standard Citi Field logo could not be used.[25] The patch echoes the shape, colors and orientation of the Citi Field logo, with the name replaced by "INAUGURAL SEASON 2009". Reaction to the patch was immediate and negative from Mets fans and critics alike,[26] with ESPN Uni Watch writer and blogger Paul Lukas calling it the "worst sleeve patch in MLB history".[27] Several fans have pointed out a resemblance between the sleeve patch and the logo for Domino's Pizza,[28] and the patch was mocked on an episode of The Colbert Report.[29]

In February 2009, the Mets unveiled a different patch, to be worn on the side of the caps and featuring the arches of the Jackie Robinson rotunda.[30]

Retrieved from "https://baseball.fandom.com/wiki/Citi_Field?oldid=43384"
Community content is available under CC-BY-SA unless otherwise noted.