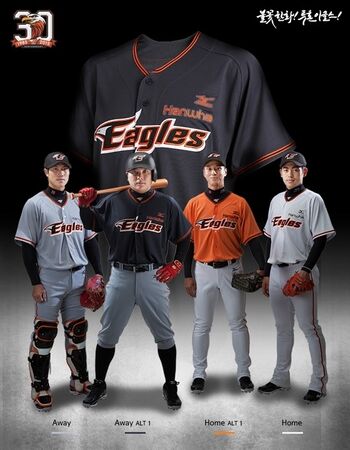 The Hanwha Eagles (한화 이글스), incorporated as the Hanwha Eagles Professional Baseball Club , are a South Korean professional baseball club based in Daejeon. As a member club of Korean Baseball Organization, the Eagles compete in the Korea Professional Baseball League. The Eagles' home ballpark is Daejeon Baseball Stadium. Founded in 1985 as the "Binggrae Eagles" (Binggrae was the then-trademark of Hanwha's confectionary branch.), they debuted in 1986 as the seventh franchise of the league. The club changed their name into the "Hanwha Eagles" after Binggrae's separation from Hanwha conglomerate in 1993. Hanwha, the owner of the club is one of the largest business conglomerate, or chaebol, in South Korea.

Although the Eagles are not the dominant club in the league, winning only once in the Korean Series in 1999 and twice the league pennants; they proved themselves as worthy competitors. As of 2011, they played in the postseason for 11 times, being the runner-up for five times. The club was renowned for their slugger bats from late 1990s to early 2000s, nicknamed as the Dynamite Bats after one of Hanwha's main business fields, explosives production. The team slugger percentage topped 0.484 in 1999, the highest team SLG in the Korean Professional Baseball League history. The severe slump in the 2009 and 2010 seasons made the club to gain a pejorative nickname of Hanwha Chickens (or Chicks), but recent recovery attempts and team-rebuilding under the new manager, Han Dae-hwa, is slowly showing its progress.

The Eagles have three retired numbers in the roster, more than any other team in the league. Those are for the slugger Jang Jong-hoon (35), the pitchers Jung Min-cheul (23) and Song Jin-woo (21). The Eagles are famous for their respect for franchise stars and veteran players.

Retrieved from "https://baseball.fandom.com/wiki/Hanwha_Eagles?oldid=54497"
Community content is available under CC-BY-SA unless otherwise noted.