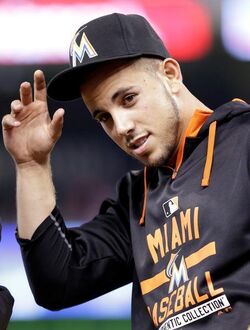 He died in the middle of his career in 2016 in a boating crash. The Marlins will retire his uniform number to honor him.

Retrieved from "https://baseball.fandom.com/wiki/José_Fernández?oldid=48653"
Community content is available under CC-BY-SA unless otherwise noted.