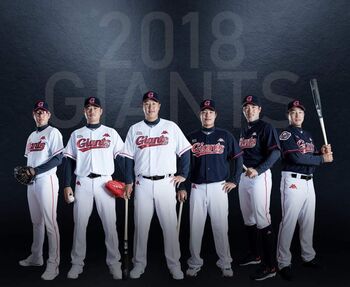 The Lotte Giants (롯데 자이언츠) are a professional baseball team in Busan, Korea. They are one of the original franchises of the Korea Baseball Organization league. From 1982 through 1986 they played in Busan Gudeok Stadium, and since then, in Sajik Baseball Stadium and Masan Baseball Stadium. They are owned by Lotte and won the KBO Championship, Korean Series twice in 1984 and 1992. The team is one of the most popular teams among the KBO baseball teams, drawing about 1.38 million spectators during the 2009 season, and this record still remains as the most attendance in a single season in any of Korean sports leagues. It is interesting to note that Lotte also owns the Chiba Lotte Marines in Japan's Nippon Professional Baseball.

Retrieved from "https://baseball.fandom.com/wiki/Lotte_Giants?oldid=54428"
Community content is available under CC-BY-SA unless otherwise noted.