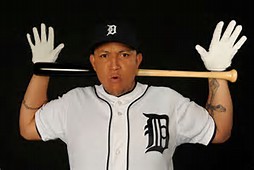 José Miguel Torres Cabrera (born April 18, 1983 in Maracay, Aragua State, Venezuela) is a Major League Baseball first baseman for the Detroit Tigers. When he made his Major League debut in 2003, Cabrera was 6'2" and weighed 210 lb, but he is currently 6'4" and 240 lb. He bats and throws right-handed. He is a four-time All-Star, having been selected to the National League All-Star Team in 2004, 2005, 2006, and 2007. Cabrera has played an uncommonly large number of positions — he has at least 100 starts at each of first base, third base, left field and right field.[1] He progressed through the Florida Marlins minor-league system and was called up from the Double-A Carolina Mudcats in 2003. According to baseball-reference.com, Cabrera is putting up statistics comparable to Hank Aaron at age 25.[2]

Cabrera made his Major League debut on June 20, 2003, at 20 years old; Edgar Rentería, at 19 years old, was the only Marlins player to make his debut at a younger age. Cabrera hit a walk-off home run in his first major league game, following Billy Parker in 1971 and Josh Bard in 2002 as the third player since 1900 to hit a game-winning home run in his big-league debut.

Quietly, Cabrera put together one of the best seasons by a National League rookie, immediately becoming the Marlins cleanup batter. Cabrera's postseason play helped propel Florida to a World Series championship over the Yankees and also landed him on the cover of ESPN The Magazine during the offseason.

In the NLDS against the Giants, Cabrera hit .286 with three RBI. After changing positions in the heat of the NLCS against the Cubs, he hit .333 with three homers and six RBI. In the World Series, Cabrera had the at-bat that defined his postseason in Game Four. Facing Roger Clemens for the first time, Cabrera, who was only 20 years old at the time, got knocked down by a Roger Clemens inside fastball. Two pitches later, he belted the Clemens offering into the right field seats.

Cabrera spent the whole 2004 season playing in the outfield, with no games at third base; he showed his arm strength as a former third baseman with his 13 outfield assists. In 284 total fielding chances, he committed nine errors and made 262 putouts.

In 2005 he came in second in the National League in hits with 198, and batted .323 with 33 homers, 43 doubles, 2 triples, and 116 RBIs. He was chosen to his second consecutive All-Star Game along with teammates Paul LoDuca and Dontrelle Willis, and won his first Silver Slugger award. His 33 home runs made him the youngest player in Major League Baseball history to hit back-to-back 30 homer seasons, at 22 years, 143 days. Albert Pujols of the Cardinals did it at 22 years, 223 days. Cabrera also became the first Florida Marlin in history to hit at least 30 home runs and bat in at least 100 runs in back-to-back seasons.

During the 2005 season, Carlos Delgado protected Cabrera in the lineup, which allowed Cabrera to see more hittable pitches rather than having more pitchers pitch around him in the order (usually by intentionally walking him). The Marlins traded Delgado to the New York Mets after the season as part of their organizationally-termed "market correction", obtaining first baseman Mike Jacobs, pitcher Yusmeiro Petit, and infielder Grant Psomas from the Mets.

Cabrera entered the 2006 season as a leader and key run producer. With great help from teammates Josh Willingham and Dan Uggla hitting behind and ahead of him respectively, Cabrera finished the year with a career-high .339 batting average, 26 home runs and 114 RBIs. He was selected to his third consecutive All-Star Game and won his second Silver Slugger.

Cabrera battled the Pirates shortstop Freddy Sanchez for the National League batting crown until the last day of the regular season. Manager Joe Girardi batted him first in the last game of the season to give him more chances to get a hit for the crown, but Cabrera finished second to Sanchez. Cabrera also finished the 2006 campaign with a career-high .568 slugging percentage and a career-high .430 on base percentage.

Another change that Cabrera endured during the 2006 season, besides the loss of many veteran teammates, was his shift back to third base. This was mainly because the Marlins' previous third baseman, Mike Lowell, was traded with Josh Beckett to the Boston Red Sox in the offseason.

On June 22, 2006, Cabrera singled on the first pitch of an attempted intentional walk during the 10th inning against pitcher Todd Williams. This oddity put the Florida Marlins ahead for good in an 8-5 victory over the Baltimore Orioles.[3]

Mets third baseman David Wright edged Cabrera in the fan voting for the National League's starting third baseman for the 2006 Major League Baseball All-Star Game. Cabrera's defense was one of the reasons given for the National League's loss to the American League in the 2006 Major League Baseball All-Star Game. With 2 outs in the 9th inning, and the National League leading 2-1, Paul Konerko singled off Trevor Hoffman to start a 9th inning rally that eventually led to the American League's victory and the AL securing home-field advantage in the 2006 World Series.

After the game, many writers and commentators[citation needed] noted that Cabrera was not playing in the best possible position to stop Konerko's single. Manager Phil Garner was criticized for not bringing in the veteran Scott Rolen in the 9th inning for defensive reasons.

During a July 9, 2006, 7-6 road loss to the Mets, there was an incident involving Cabrera and his teammate Scott Olsen. Olsen had matched Mets starter Tom Glavine until the Mets took a 2-0 lead on Xavier Nady's two-run home run. An agitated Olsen was able to retire the next two batters before José Valentín doubled to left. The next batter, Paul Lo Duca, hit a hard grounder that glanced off Cabrera's glove and rolled into left field. Valentin scored and Lo Duca raced to second with a double.

While the ball glanced off Cabrera's glove, Olsen seemed to believe that Cabrera did not give his full effort to get to the ball, and spoke to him about it. As they came off the field, Olsen could be seen shouting something at Cabrera. A moment later, television cameras showed Cabrera in the crowded dugout reaching past teammates to poke his finger at Olsen as the pitcher walked past him. Olsen tried to jab back at Cabrera, who charged Olsen and tried to kick the pitcher before both players were quickly separated by teammates.[4]

On February 17, 2007, Cabrera became the first player of the 2007 offseason to win his arbitration hearing, obtaining a one-year contract worth $7.4 million.[5]

In 2007, Cabrera won the NL Player of the Week twice (April 1 - April 8 and June 4 - June 10). Cabrera also made his way through the Marlins record book, passing former Marlins Gary Sheffield and Derrek Lee for second on the Marlin home run list. He also moved into third in all-time Marlin RBI and first in batting average.

Cabrera also made his 4th consecutive All-Star game. Most thought he should have started since he had better numbers at that position over Mets 3B David Wright, but didn't because Wright, in the New York market, garnered more popularity from fans.[citation needed] Cabrera was initially supposed to participate in the Home Run Derby during the All-Star weekend, but an injured left shoulder, suffered a few days before the All-Star break, forced him out of the Derby and limited him in the All-Star game to a pinch hit at-bat against Dan Haren in which he struck out.

On September 4, 2007, Cabrera batted in his 500th run as a major leaguer, making him the third-youngest player to accumulate 500 RBI. Hall of Famers Mel Ott and Ted Williams were the only players to precede him in this feat.[6]

On September 15, 2007, at Coors Field in Denver, Colorado, Cabrera added two more achievements to his already impressive career. For the fourth consecutive season (2004-2007) Cabrera managed to drive in at least 100 runs. His 100th RBI came in the first inning against Ubaldo Jimenez when he followed a Jeremy Hermida triple with a single to drive him in. Five innings later, in the 6th, Cabrera added four more RBI when he hit a ball 438 feet into the center-field trees for his first career grand slam.[7] He joined David Ortiz, Alex Rodriguez, Albert Pujols, and Vladimir Guerrero as the only players to reach the 100-RBI plateau in each of the four previous seasons.[8]

Cabrera ended the season with career highs in both home runs and runs batted in. He finished off the year with 34 home runs, 119 RBI, a .320 batting average, and a .401 on-base percentage in 588 at bats.

On March 22, 2008 Cabrera reached an agreement with the Tigers on an eight-year, $153.3 million contract extension, the fourth-largest contract in baseball history, behind those signed by Alex Rodriguez, Derek Jeter, and Manny Ramirez.[10] The deal is also the largest in Tigers history, surpassing the five-year, $75 million contract signed by Magglio Ordóñez in 2005. Cabrera will earn $11.3 million in 2008, and then an average of $19 million per year through 2015.

Cabrera made his Tigers debut on March 31, 2008 in a home game against the Kansas City Royals. In his third at-bat, he hit a solo home run off Royals pitcher Gil Meche. He finished the game 1-for-5 with two strikeouts, and the Tigers lost 5-4 in 11 innings.[11]

On April 22, manager Jim Leyland announced that Cabrera would be moving to first base, with Carlos Guillén becoming the starting third baseman. Cabrera had already made seven appearances at first, the first appearances at the position of his career.[12]

On September 7, Cabrera reached the 1,000-hit plateau on a home run off Twins pitcher Glen Perkins.[14]

Cabrera finished the 2008 season with a career-high 37 home runs, which led the American League.[15] He became the youngest AL home run champion since Troy Glaus in 2000.[16] He also established a new career high in RBI (127).[17] He became one of only five players who have driven in at least 100 runs in each the past five seasons, joining Alex Rodriguez, Albert Pujols, David Ortiz, and Bobby Abreu.[18]

In 2012 Miguel Cabrera became the first Triple Crown winner since Carl Yastrzemski in 1967. He hit .330 with 44 HR and 139 RBI. He also moved to third base with the Tigers' acquiration of Prince Fielder. Cabrera got less walks with Fielder hitting behind him. He was also an all-star.

Cabrera is a practitioner of Santería and became a babalao in the 2006 offseason.[19] His wife is named Rosangel, and they have a daughter with the same name. Cabrera and his family currently live in Birmingham, Michigan.[citation needed] Cabrera's favorite fan is Erik. His Favorite Fruit Is Ribs

Retrieved from "https://baseball.fandom.com/wiki/Miguel_Cabrera?oldid=48905"
Community content is available under CC-BY-SA unless otherwise noted.