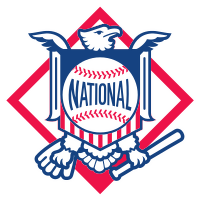 The term National League generally refers to the organization more properly referred to as the National League of Professional Baseball Clubs, the older (founded on February 2, 1876) of the two leagues constituting Major League Baseball in the United States and Canada. The National League is also known as the Senior Circuit, due to the fact that it has existed 25 years longer than the rival American League. Beginning with the 1903 season, the regular season champions of the two leagues have met annually in the World Series, with the exception of 1904 and 1994. Through the 2005 season, National League teams have won 41 and lost 60 of the 101 World Series played, although the National Leaguers have a rather better percentage of 28 and 34 in Series where the New York Yankees were not involved.

The new league encountered its first rival organization, when the American Association began play in 1882. The A.A. offered cheaper ticket prices and Sunday baseball and alcoholic beverages where one or both were legal. The National League and American Association participated in an early version of the World Series seven times during their ten-year coexistence, though the series were only exhibition games arranged by the teams involved. The N.L. won most of those encounters, while some ended in ties due to disputes or other issues.

After the 1891 season, the A.A. disbanded and merged with the N.L., which became known legally for the next decade or so as the "National League and American Association". The teams now known as the Cincinnati Reds, Los Angeles Dodgers and Pittsburgh Pirates had already switched from the A.A. to the N.L. prior to 1892. With the merger the N.L. absorbed the team now known as the St. Louis Cardinals, along with three other teams which did not survive into the 20th century.

The National League became a 12-team circuit with monopoly status for the rest of the decade. The league became embroiled in numerous internal conflicts, not the least of which was a plan supported by some owners (and bitterly opposed by others) to form a "trust," wherein there would be one common ownership of all twelve N.L. teams. The N.L. used its monopoly power to force a $2,400 limit on annual player wages in 1894.

Then, the league contracted to eight teams for the 1900 season, eliminating its teams in Baltimore, Cleveland, Louisville, and Washington. This provided an opportunity for competition. Three of those cities received franchises in the new American League in 1901. The A.L. declined to renew its National Agreement membership when it expired, and on January 28, 1901, officially declared itself the second major league. By 1903, the upstart A.L. had located teams in Boston, Chicago, New York, Philadelphia, and St. Louis. Only the Cincinnati Reds and Pittsburgh Pirates had no A.L. team in their markets.

The National League at first refused to recognize the new league, but reality set in as talent and money drained away to the new league. After two years of bitter contention a new version of the National Agreement was signed in 1903. This meant formal acceptance of each league by the other as an equal partner in major league baseball.

After the contraction to eight teams in 1900, the National League consisted of the same eight teams in the same cities until 1953, when the Boston Braves moved to Milwaukee. The team later moved to Atlanta in 1966. In 1958, the Brooklyn Dodgers and New York Giants moved to Los Angeles and San Francisco, respectively, bringing major league baseball to the West Coast of the U.S. for the first time.

The N.L. remained an eight-team league until 1962, when it added the New York Mets and the Houston Colt .45s (renamed the Houston Astros in 1965). In 1969 the league added the San Diego Padres and the Montreal Expos (now the Washington Nationals), becoming a 12-team league for the first time since 1899. In 1993 the league expanded again, adding the Colorado Rockies and the Florida Marlins. In 1998, the Arizona Diamondbacks became the league's fifteenth franchise, and the Milwaukee Brewers moved from the American League to the National, to make the National League the 16-team league it is today.

As a result of expansion to 12 teams in 1969, the National League, which for the first 93 years of its existence competed equally in a single grouping, reorganized into two divisions of six teams (East and West), with the division champions meeting in the National League Championship Series (an additional round of postseason competition) for the right to advance to the World Series. Beginning with the 1994 season, the league has been divided into three divisions (East, West, and Central), with the addition of a Wild Card team (the team with the best record among those finishing in second place) to enable four teams to advance to the preliminary National League Division Series.

Often characterized as being a more "traditional" or "pure" league, the National League (as of 2005 at least) has never adopted the designated hitter rule as did the American League in 1973. In theory, this means the role of the N.L. manager is somewhat expanded in comparison to the A.L., because the manager must take offense into account when making pitching substitutions and vice versa. There are perceived to be fewer home runs and big offensive plays due to the presence of the pitcher in the batting order, although this is not always the case.

For the first 96 years of its coexistence with the American League, National League teams faced their A.L. counterparts only in exhibition games or in the World Series. Beginning in 1997, however, interleague games have been played during the regular season, and count in the standings.

The original eight charter teams were the following:

After the 1899 season, the league contracted for the first time since 1877, dropping four clubs and leaving eight teams which would stay in place for over 50 years.

Contraction, Expansion and Relocation Since 1892

Several other sports have had leagues called "National League", usually with the sport name as a qualifier, including:

Template Documentation[view | edit | history | purge]
Note: The template above might be partially or fully invisible.

Description
Use this on pages which directly use Wikipedia content.
Syntax
Type {{wikipedia|page name}} as the last item of the page text.
Note that "page name" should be the title of the page on Wikipedia.

The above documentation is transcluded from Template:Wikipedia/doc. (edit | history) (How does this work?)
If you're done making changes, please purge the page. (Why?)
Editors can experiment in the template's sandbox (edit | diff) and testcases (edit) pages.
Please add categories and interwikis to the /doc subpage, using <includeonly> tags. View all subpages of this page.
Community content is available under CC-BY-SA unless otherwise noted.
Advertisement