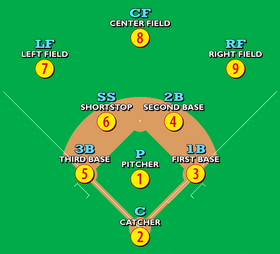 There are 9 fielding positions in baseball. Each position has an associated number (from 1 to 9) which is used to score putouts. For example:

The fielding positions in baseball are the basis for the famous comedy routine Who's On First?, created by the team of Abbott and C.

Retrieved from "https://baseball.fandom.com/wiki/Positions?oldid=55623"
Community content is available under CC-BY-SA unless otherwise noted.