Roy Edward Oswalt (born August 29, 1977 in Weir, Mississippi) is an American Major League Baseball Pitcher. Oswalt made his debut on May 6, 2001. Oswalt, a slender six-foot zero-inch right-handed starting pitcher, is currently in his seventh major league season. He had spent his entire career in the Houston Astros organization, before being traded to the Philadelphia Phillies prior to the trade deadline in 2010. Oswalt is known for being especially effective at home.

Oswalt is the major league leader in wins since he was called up in 2001.

Oswalt grew up in Weir, Mississippi, the son of Billy Oswalt, a logger and a Vietnam veteran. He is married to his high school sweetheart, Nicole, and together they have two daughters. When they were kids, he and Nicole used to play T-ball against one another. At Weir High School, Oswalt played defensive back and wide receiver on the football team, who won a state title his senior year. He graduated in a class with 32 students.

After his freshman year at Holmes Community College in Goodman, Mississippi, Oswalt was drafted by the Houston Astros. They offered him $50,000 to sign, but he decided to go back to play one more year of college baseball. During his sophomore year, he grew two inches, put on 15 pounds, and added 3 mph to his fastball. The following offseason, the Astros drafted him in the 23rd round of the 1996 First-Year Player Draft, and he was signed for $500,000 by Astros scouts Ralph Bratton, Brian Granger, and James Farrar on May 18, 1997.

In 1997, Oswalt played rookie ball in the Gulf Coast League, and played well enough to be called up to the Auburn Doubledays of the New York - Penn League.

He would split 1998 with the same two teams. In 16.0 innings of work with the Gulf Coast Astros, he struck out 27 batters and walked just one. He was promoted again to Auburn, where he recorded the league's fourth-lowest ERA (2.18).

In 1999, when Oswalt was with the Class A Michigan Battle Cats in the Midwest League, he suffered an apparently serious shoulder injury. After a month of pain in his upper shoulder, Oswalt was convinced that his shoulder was torn. Shortly thereafter, he was checking the spark plug wires on his pickup truck. He touched one of the spark plug wires, causing the truck's engine to start. The truck's electric current flowed through Oswalt's body, and consequently the muscles in his hand tightened on the spark plug wire. Unable to let go of it, Oswalt grasped the wire for almost one minute. Oswalt then claimed his foot slipped off the truck's bumper and he was finally "thrown off." After the electric shock, Oswalt told his wife that his shoulder's condition improved and that he no longer felt any pain. Apparently, the electric charge loosened accumulated scar tissue in the shoulder. Oswalt claims he has not felt any pain in his shoulder since the incident.[1] He finished 1999 with 143 strikeouts and a club-high 13 wins.

Oswalt began 2000 with the Class A Kissimmee Cobras of the Florida State League, going 4-3 with a 2.98 ERA before a player injury on Class AA Round Rock Express of the Texas League, got him called up. Oswalt was only expected to pitch a few games, and had been given a round-trip ticket. But after striking out 15 batters in his first start with the Express, manager Jackie Moore tore up his ticket. Nolan Ryan, owner of the Express and Oswalt's idol, admired his calm demeanor and his aggressiveness so much that he successfully lobbied to keep Oswalt on the roster, where he would go 11-4 with a 1.94 ERA, and recording 141 strikeouts over 19 games (18 starts). It was here that he met pitching coach Mike Maddux, who counseled the young Oswalt to be economical in his pitch selection by throwing more breaking balls and inducing groundouts early in the count.

As a result of his success at Round Rock, Oswalt was selected to play on the United States baseball team at the 2000 Summer Olympics.

In the Olympics, Oswalt pitched in the semi-finals against South Korea, a game that the U.S. won with a walk-off home run by Doug Mientkiewicz en route to their surprising gold medal finish.

In 2001, Oswalt started the season with the Class AAA New Orleans Zephyrs, where he went 2-3 before being called up to the major leagues when left-hander Wayne Franklin was optioned down.

Oswalt finished his rookie campaign in 2001 with a 14-3 record and a 2.73 ERA, including a 12- 2 mark with a 2.82 ERA in his 20 starts. He finished second in voting for National League Rookie of the Year, losing unanimously to Albert Pujols of the St. Louis Cardinals. He also placed fifth in Cy Young Award voting, which was won by Randy Johnson of the Arizona Diamondbacks. He pitched 24 consecutive scoreless innings before giving up a second-inning home run to Andrés Galarraga of the San Francisco Giants.

2002 would be another step forward for Oswalt, who finished the season with a 19-9 record, striking out a career-high 208 batters and finishing with an ERA of 3.01. He would tie with Eric Gagné for fourth in Cy Young voting, losing once again to Johnson. From July 27 to September 8, he won a then-club record 9 straight starts before getting a no-decision in an extra innings Astros loss to St. Louis.

Injuries would plague Oswalt in 2003, but he would still record a 10-5 record over just 21 starts, and would win the Darryl Kile Award, presented to the individual "who reflects the qualities of decency and character represented by" the former Astros pitcher by the Houston chapter of the Baseball Writers Association of America (BBWAA). Oswalt also started a no-hitter against the New York Yankees on June 11. Oswalt left after one inning, and 5 more Astros continued to no-hit the Yankees.

He would rebound in 2004 with the first 20-win season of his career, the only National League pitcher to do so that year. He went 20-10 despite a career-high 3.49 ERA, and struck out 206 batters. He finished third in Cy Young Award voting, behind his teammate Roger Clemens and, once again, Randy Johnson. He would also make his first postseason appearance, going 1-0 with a 4.19 ERA in three starts and one relief appearance. He threw two complete-game shutouts during the season, both against the Milwaukee Brewers.

In 2005, Oswalt threw a career-high 241 and two thirds innings, striking out 184 batters and only walking 48 on the way to his second consecutive 20-win season - the first Astro to do so since Joe Niekro in 1979-80. He notched a 20-12 record, including a career-best 10-game winning streak from April 10 to July 26, with a sparkling 2.94 ERA, and was named to his first Major League Baseball All-Star Game as the National League All-Star Final Vote winner. He was fourth in Cy Young Award balloting, losing to Chris Carpenter of the Cardinals. In the postseason that year, Oswalt started 4 games and went 3-0. His two seven inning one-run performances netted him the NLCS MVP award, including a three-hit seven strikeout gem in game 6, after the Astros lost game 5 on a home run by Albert Pujols in the ninth inning.

Oswalt went 15-8 in 2006, and was named to his second consecutive All-Star team. Led the National League with a 2.94 ERA, and struck out 166 batters while only walking 38. At the 2006 trade deadline, there was a rumor that the mets acquired Roy Oswalt, but it was a false statement. He would again finish fourth in Cy Young Award voting, losing once again to the ace of the Arizona Diamondbacks - not Randy Johnson this time, who had been traded to the New York Yankees - but rather Brandon Webb. Also ahead of him in voting were Carpenter and San Diego Padres closer Trevor Hoffman, who had set the career record for saves. On September 18, while pitching to the Cincinnati Reds, Oswalt recorded his 1,000th strikeout, becoming the eighth player in Astros history to reach this milestone.

Before the 2007 season, Roy Oswalt received the 2nd highest Pitcher Player Value Ranking from Sports Illustrated Baseball Preview Edition. He was rated the best in the NL ahead of Brandon Webb and Chris Carpenter, and was only below the 2006 Triple Crown winner Johan Santana. On July 5, 2007 ESPNews reported that Oswalt would replace an injured John Smoltz on the National League All-star team, making it Oswalt's 3rd consecutive all-star game appearance. He did not pitch in the 2007 All-Star game, however. On August 13, 2007, Sports Illustrated named Roy Oswalt as one of the 5 pitchers (along with Johan Santana, Roy Halladay, Jake Peavy, and Justin Verlander) in the Current Dream Team.[2] On 26 September, 2007, it was reported that Oswalt was suffering from pain in his left side and it was decided to shut him down for the remainder of the season so as not to risk a more serious injury.[3] He finished the 2007 season throwing 212 innings, his fourth consecutive year of 200 or more innings pitched, a 14-7 record, an ERA of 3.18 and 154 strikeouts. For the second straight year he has suffered from a bad bullpen, which has cost him three to four victories on the year.

Oswalt is one of only 7 ballplayers who pitched in the NL in 2007 who won at least 12 games in each year from 2004-07, the others being Carlos Zambrano, Greg Maddux, Jason Marquis, Tim Hudson, Derek Lowe, and Jeff Suppan.

Oswalt is known as one of the faster workers in baseball in terms of time between pitches. Despite his small frame, he is one of baseball's hardest hurlers, and frequently appears among the league leaders in Innings Pitched.

Oswalt throws four primary pitches. His fastball consistently between 92-94 miles per hour. Occasionally, it touches 95-97 mph. He throws two overhand curveballs: a hard snapping curve in the low 80s that is gripped with two forefingers over the seams and a looping slow curve of about 70 mph that is thrown with three fingers over the seams. Oswalt also throws a straight changeup in the low 80s, and a slider in the mid 80s. On occasion, Oswalt will mix a cut fastball or a two-seam fastball. Roy's pitching style emphasizes changes of speed and elevation. 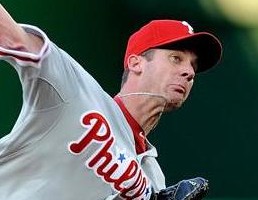 Retrieved from "https://baseball.fandom.com/wiki/Roy_Oswalt?oldid=30699"
Community content is available under CC-BY-SA unless otherwise noted.