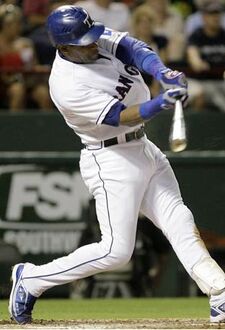 Samuel (Sammy) Sosa Peralta (born November 12 1968 in San Pedro de Macorís, Dominican Republic) is a retired Dominican professional baseball player who played right fielder. He has formerly played for the Texas Rangers, Chicago White Sox, Chicago Cubs and Baltimore Orioles. He ended the 2005 season with 588 career home runs, placing him fifth on the all-time home run list. Following the 2005 season, Sosa did not officially retire, but did not play during the 2006 season. In early 2007, he signed with the Rangers in a comeback attempt. He batted .252 in 2007 for the Texas Rangers and had 21 home runs and 92 rbi's - even though he was used sparingly in September, 2007. He retired for good after the 2007 season. He ended his career with 609 home runs and is now 6th on the all-time list.

As a child, he shined shoes to help support his mother and six siblings. [citation needed] He started playing baseball at 14, a fairly old age for starting baseball, after he decided to quit boxing at his mother's behest.[citation needed] He played baseball with his friends using cut milk cartons and towels as gloves. They made a ball out of a tightly tied knot of towels. The Philadelphia Phillies attempted to sign him at age 15, but this deal was not allowed by Major League Baseball because of a rule making the minimum age for contracts between major league teams and players 16. [citation needed] After turning 16, he signed with the Texas Rangers in 1985.

After years as a respected power hitter, he emerged during the 1998 season as one of baseball's greatest. It was in this season that both Sosa and Mark McGwire passed Roger Maris' long-standing single season home run mark of 61 homeruns. Sosa ended the season with 66, behind McGwire's 70. His 416 total bases were the most in a single season in 50 years, since Stan Musial's 429 in 1948. Sosa found some consolation in winning the National League Most Valuable Player Award for leading the Cubs into the playoffs in 1998, earning every first-place vote except for the two cast by St. Louis writers, who voted for McGwire. Sosa set the all-time major league record with 20 home runs in one month - June 1998, breaking the previous record of 18, by Rudy York of Detroit in August 1937 and the NL mark of 17 by Willie Mays in August 1965. He and McGwire shared Sports Illustrated magazine's 1998 "Sportsmen of the Year" award. Sosa's accomplishments were celebrated with a ticker-tape parade in his honor in New York City hosted by Mayor Giuliani, and he was asked to be a guest at US President Bill Clinton's 1999 State of the Union Address.

In 2001, he hit 64 home runs, becoming the first, and, thus far, only, player ever with three 60 home run seasons. Despite this, he did not lead the league in any of those three seasons; in 2001, he finished behind Barry Bonds, who hit 73 homers, breaking the single-season HR record set by McGwire in 1998 (70). In the same season he set personal records in runs scored (146), RBIs (160), walks (116), on base percentage (.437), slugging percentage (.737), and batting average (.328). He led the majors in runs and RBIs, was 2nd in home runs, 2nd in slugging percentage, 3rd in walks, 4th in on base percentage, 12th in batting average, and 15th in hits. He also surpassed his 1998 numbers in total bases, compiling 425. Sosa once again led the league in home runs with 49 in 2002. Known as a free-swinger in his early years, and as an easy strikeout candidate, Sosa became an effective hitter for average. He tied Johnny Mize for the major league record of 6 games in his career with 3 home runs in one game.

In 2005, The Sporting News published an update of their 1999 book Baseball's 100 Greatest Players. Sosa did not make the original edition, but for the 2005 update, with his career totals considerably higher, he was ranked at Number 95.

In the winter after the 1990 season, Sosa faced accusations of spousal abuse. Sosa was accused of beating his wife with a baseball bat and beating her with a bottle of rum after she refused to grant him a divorce. [1] The charges were dismissed.[citation needed]

While Sosa's accomplishments during his career with the Cubs had been vast, as a team they saw little success, only once making the playoffs during Sosa's tenure-a wildcard playoff berth in 1998. That would change in 2003, when the Cubs and new manager Dusty Baker won the National League Central Division title. The year was not all good news for Sosa, however. In May, he spent his first time on the disabled list since 1996 after having a toenail removed. On June 3, 2003, Sosa was ejected from a Chicago Cubs-Tampa Bay Devil Rays game in the first inning when umpires discovered he had been using a corked bat.[2]

Major League Baseball confiscated and tested 76 of Sosa's other bats after his ejection; all were found to be clean, with no cork.[3] Sosa stated that he had accidentally used the corked bat, which he claimed he only used during batting practice and/or home run contests. On June 6, Sosa was suspended for eight games on account of the corked bat.[4] However, the suspension was reduced to seven games after appeal on June 11.[5]

After the suspension, Sosa returned to form and hit 40 home runs in his shortened season, including titanic blasts in games 1 and 2 of the NLCS against the Florida Marlins. The Cubs were just five outs away from reaching the World Series for the first time since 1945, before a Game 6 collapse and a 9-6 loss in Game 7.

In May 2004, Sosa suffered a strange injury. While sitting next to his locker chatting with reporters before a game in San Diego's PETCO Park, he sneezed violently, causing severe back pain. He was diagnosed with back spasms and placed on the disabled list. Later, he fell into one of the worst slumps of his career, only snapping out of it in the last week of the season. He finished with 35 homers, far below his numbers of his best years.

Sosa's actions in the last game of the 2004 season raised many eyebrows, and eventually led to his departure from Chicago. Going into the last game, the Cubs had lost seven of eight games to fall out of contention for a playoff berth. Sosa had already been told that he would not be in the starting lineup for that game, and arrived at Wrigley Field only an hour before game time; this was a violation of team rules. He then left Wrigley without permission during the game, claiming to reporters afterwards that he left in the seventh inning. However, a surveillance video proved that Sosa had left the stadium 15 minutes after the game started. Several days later, the Cubs fined him one game's pay (approximately $87,000).

After his teammates learned of the departure that day, they decided to vent their frustration on Sosa's trademark boombox that he kept in his locker. For several seasons, Sosa was notorious for monopolizing the music in the locker room (it's normally the custom in the majors for the team's starting pitcher that day to select the music that is played in the locker that day). He would superstitiously play pop music deemed undesirable by most of his teammates or salsa music at a very high volume, often refusing to turn it down (even on one occasion when then-teammate Joe Girardi was suffering from a migraine). One of Sosa's teammates destroyed the boombox with a bat. Many speculate that Cubs pitcher Kerry Wood was the boombox destroyer. That action was viewed as symbolic of the end of Sosa's era with the Cubs.

By then, most observers considered Sosa to be declining as a player, as he was the only player in Major League Baseball whose batting average, home runs, and RBI all declined in each year since 2001. It has been speculated by many members of the media and fans about the possibility of steroid use by Sosa due to the dramatic statistical swings throughout his career.[6][7] Others noted that Sosa's production went into a tailspin immediately after he was hit in the head by a Salomon Torres pitch in April 2003, and never recovered to former levels.

Although no evidence of steroid use by Sosa has ever been found, following suspicions of PED use and his late-2004 actions, the Cubs were generally regarded as eager to trade him. However, the structure of his contract made this problematic. Sosa had one year left on his contract, with a team option for a second year. His salary would be $17 million in 2005, and was to rise to $18 million in 2006. However, the contract also stipulated that if Sosa was traded during the duration of the deal, the team option would be waived, making his 2006 salary guaranteed, and adding a $19 million option for 2007.

On January 28, 2005 it was announced that the Cubs had reached an agreement to trade Sosa to the Baltimore Orioles in exchange for infielder/outfielder Jerry Hairston, Jr. and two minor league prospects. In order to facilitate the deal, Sosa and his agent agreed to waive the clause that guaranteed his 2006 salary, and the players' union indicated it would not object to that agreement. Under the deal, Sosa earned $17,875,000 for the 2005 season, with the Cubs paying $7 million of his salary. By playing for the 2005 Orioles, with 500 home run hitter Rafael Palmeiro, Sosa and Palmeiro became the first 500 home run club members in history to play together on the same team after reaching their 500 home run marks.

After a great deal of preseason hype from Sosa and Orioles management, Sosa had a modest start to the season, which was followed by terrible slumps during mid-season. His trademark home run hop (which once signaled a sure home run) was now followed by mostly a lot of long fly ball outs. The slumps caused then Orioles manager Lee Mazzilli to drop Sosa as low as the 7th spot in the lineup. When Sosa's slump continued, Mazzilli resorted to benching Sosa. Sosa eventually returned to the lineup and while the slumps did subside somewhat, he still had problems producing as a hitter. Toward the end of the 2005 season, Sosa had another mysterious injury and spent a great deal of time away from the team.

Sosa finished the season batting .221 with 14 home runs, his worst performance since 1992, and continuing his post-2001 trend of declines in batting average, homers, and RBI. On December 7, 2005, the Orioles decided not to offer him arbitration, effectively ending his Baltimore Orioles tenure and making him a free agent.

At the end of January 2006, the Washington Nationals offered Sosa two different minor-league offers, both of which he turned down, seemingly settling into retirement. On February 15, 2006, Sosa's agent Adam Katz stated: "We're not going to put him on the retirement list. We decided that [not putting him on that list] was the best thing to do. But I can say, with reasonable certainty, that we've seen Sammy in a baseball uniform for the last time."[8]

However, this would prove not to be true, as on January 30, 2007 the Texas Rangers, Sosa's original team, signed him to a minor league deal worth $500,000 plus "significant incentives". The contract included an invitation to Spring Training where Sosa will compete for a spot in the lineup with Nelson Cruz, Jason Botts and other rookies/prospects.[9] Sosa is not guaranteed a spot on Texas' 40-man roster, so it is possible that he will not play an actual major league game for them. Sosa's contract allows him to elect for free agency on March 15 if he is not added to the major league team by then.

If Sosa does not appear in another major league game, he will be eligible for the Baseball Hall of Fame in the election whose results will be announced in January 2011.

Retrieved from "https://baseball.fandom.com/wiki/Sammy_Sosa?oldid=43633"
Community content is available under CC-BY-SA unless otherwise noted.