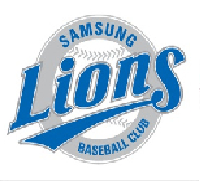 Samsung Lions Baseball Club (삼성 라이온즈) is a Korea Professional Baseball team founded in 1982. They are based in Daegu and are members of the Korean Baseball Organization. Their home stadium is Daegu Samsung Lions Park. They have won the Korean Series seven times.

Julio Franco of the Atlanta Braves once was a member of this team.

Retrieved from "https://baseball.fandom.com/wiki/Samsung_Lions?oldid=54434"
Community content is available under CC-BY-SA unless otherwise noted.