After posting a .332 hitter for Auburn University, Hulett was drafted by the Texas Rangers in the 14th round of the 2004 Major League Baseball Draft.[1] Hulett hit .274 in 70 games for the Single-A Spokane Indians in 2004. In 2005, he was promoted to the Single-A Clinton Lumber Kings, where he batted .265 and was a mid-season All-Star. He started 2006 in Single-A Bakersfield before being promoted to the Double-A Frisco RoughRiders. He played for the Oklahoma RedHawks in 2007, hitting .272 in 132 games. On December 12, 2007, he was traded to the Seattle Mariners for Ben Broussard.

On February 15, 2009, Hulett was designated for assignment to make room for newly claimed pitcher Luis Peña from the Milwaukee Brewers[3]; he was claimed by the Kansas City Royals four days later.[4]

On November 25, 2009, Hulett was traded to the Boston Red Sox for a player to be named later or cash considerations.[5] 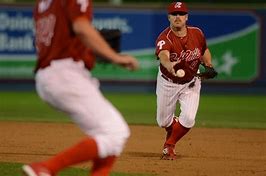 Retrieved from "https://baseball.fandom.com/wiki/Tug_Hulett?oldid=51753"
Community content is available under CC-BY-SA unless otherwise noted.