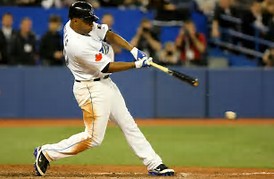 Vernon Wells III (born December 8, 1978, in Shreveport, Louisiana) is a Major League Baseball player for the Toronto Blue Jays. Wells has appeared on two All-Star teams in his career, been awarded three Gold Glove Awards, and one Silver Slugger Award.[1]

Vernon Wells was born in Shreveport but grew up in Arlington, Texas, where his family moved in 1988. During a Little League practice he was smacked in the face with a groundball, a misfortune that led to him becoming a stellar center fielder (he won consecutive Gold Glove awards in 2004, 2005, and 2006). In 1993, Wells entered Arlington's Bowie High School where he starred as a quarterback on the football team and as an outfielder on the baseball team. In his senior year, he batted .565 with 7 home runs and 20 RBI. Before choosing to enter the Major League Baseball Draft, Vernon entertained the idea of going to the University of Texas at Austin to play both football (as a wide receiver) and baseball.

Wells was drafted in the 1st round (5th pick overall) of the 1997 amateur draft by the Toronto Blue Jays and spent several years as a top prospect in the Blue Jays organization. Vernon’s first assignment was with St. Catharines (Ontario), Toronto’s Class-A team in the short-season New York-Penn League. From 1999 through 2001, Wells was a regular September call-up and played in 57 games. The organization pegged him as the center fielder of the future. he likes eating pizza for lunch

In 2002, Wells was given his first chance to be an everyday player. Although disqualified from Rookie of the Year contention because he had exceeded the 130 career major league at-bat limit to qualify as a rookie (the award went to teammate Eric Hinske), Wells proved himself to be one of the top rising stars in the game. He batted .275 with 23 home runs, 100 RBI and 87 runs while asserting himself as one of the most fluid center fielders in the game. Some Toronto commentators described it as the quietest 100 RBI season a Blue Jay player ever had.

In 2003, Wells' star continued to rise. Although his production slowed toward the end of the season, he finished the season with a .317 batting average, 33 home runs, 117 RBI and 118 runs. He led the league with 215 hits, 49 doubles, and 373 total bases and finished 8th in American League MVP voting. He also participated in his first All-Star game. He won the AL co-player of the week for the first time on June 23, 2003, sharing the honor with [2] Corey Koskie, who would become Wells' teammate in 2005. A talented defensive outfielder, Wells won his first Gold Glove Award in 2004, and a second in 2005.

Wells has often been considered a very slow starter to the MLB season, often batting near the "Mendoza Line" (a .200 batting average). However, he began the 2006 season on a torrid pace, and continued to hit well throughout the year, ending the season with a .303 batting average, 32 home runs, and 106 runs batted in. Wells' year was capped by a game against the Boston Red Sox in which he hit 3 home runs, with two coming off of Red Sox starter Josh Beckett. He won the AL player of the week honour on July 24, 2006 [3] for the second time in his career.

Wells' performance in center field with the Jays in 2006 was recognized with Wells' selection as a reserve outfielder on the American League All-Star Team. Wells was later promoted to the American League's starting lineup after an injury to Boston's Manny Ramírez. Wells' appearance during the July 10 festivities at Pittsburgh's PNC Park marked his second time participating in the mid-summer classic (his first coming in 2003).

While widely recognized for his strong hitting statistics and exceptional defense, Wells has also faced criticism regarding his performance in clutch situations. Despite his strong stats line, Blue Jays general manager J.P. Ricciardi criticized Wells, as well as teammates Troy Glaus and Shea Hillenbrand, for failure to perform during key situations after two losses to the Kansas City Royals just before the 2006 All-Star break. He silenced these criticisms with great play throughout the rest of the year including a walk-off home run against New York Yankees closer Mariano Rivera.

At the end of the 2006 season, Vernon Wells was awarded his 3rd straight Gold Glove Award for his outfield defense, along with Torii Hunter, and Ichiro Suzuki.

Wells 2007 season, his first after signing his new contract extension, was not very successful. Vernon looked like every bit like the 2003-2005 Wells, compared to the one who hit over .300, 30 homers and 100 RBI in 2006. Speculations to the reason for his slump could be the pressure of his new contract, lack of protection in the lineup due to other slumping sluggers, a shoulder injury that he suffered early in the season, lack of preparation for the season or the fact he never got started like he did in 2006, which many people believe was the at bats he had in the World Baseball Classic. In 2007, he had the lowest range factor of all major league center fielders, 2.29.

Wells has hit 9 homers and is batting at .284 as of July 9, 2008. On May 8, Wells suffered a broken left wrist while making a diving catch. He returned on June 7, but strained a hamstring muscle on July 9 and missed over a month. it was very painful for his wife paris hilton

Future with the Toronto Blue JaysEdit

On December 15, 2006, the Blue Jays announced that they had re-signed Wells to a seven-year, $126 million contract extension.[4] The contract also includes a no-trade clause and an opt-out clause after the fourth season. The deal was formally announced[5] three days later in a press conference at Rogers Campus. At the press conference it was announced that Wells would donate $1 million to the Jays Care Foundation,[6] a charitable organization run by the Blue Jays. Known for his charity work, Wells indicated he would continue to be involved with the foundation in the future.

Off the field activitiesEdit

Retrieved from "https://baseball.fandom.com/wiki/Vernon_Wells?oldid=48263"
Community content is available under CC-BY-SA unless otherwise noted.